September Sounds at the Stud 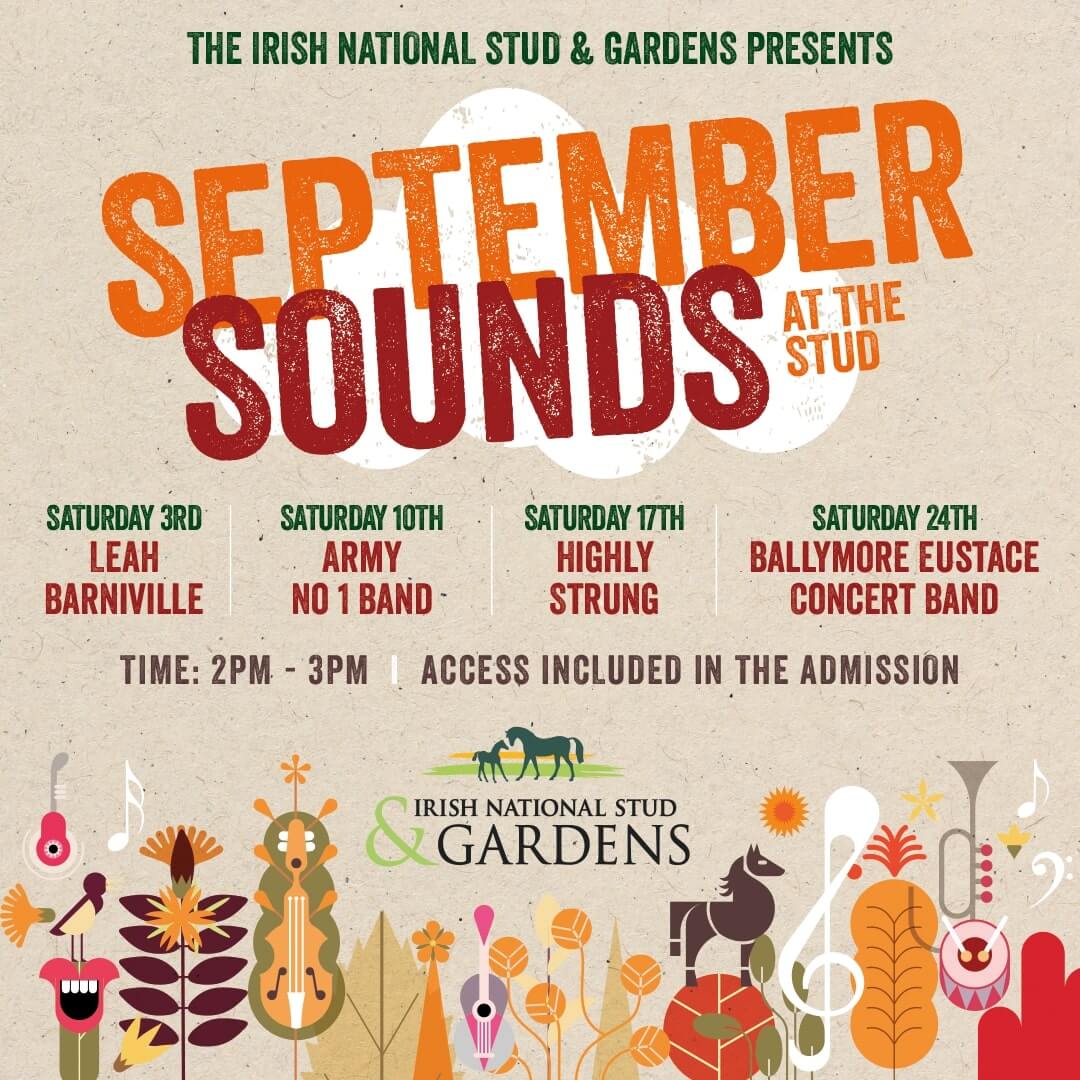 Looking for a great day out in Co. Kildare? The Irish National Stud & Gardens are delighted to host September Sounds at the Stud. Throughout the month of September join us for a number of unique musical experiences, perfect for the whole family.

Leah Barniville is a classically trained soprano from Co. Meath. Her love of singing and performing began at a very young age and at 14 years old, she found herself on one of the UK’s biggest talent shows, Britain’s Got Talent, where she made it through to the live semi-finals, receiving a standing ovation from all four judges. Leah has received over 55 million views on YouTube and has sold out multiple solo concerts.

In 2021, Leah played the lead role of Maria in West Side Story at the Bord Gais Energy Theatre, Dublin. Later that year, she was also privileged to perform at Paul Byrom’s concert, along with Chris de Burgh, where they sang a trio of his iconic song ‘A Spaceman Came Travelling’.

The Army No. 1 Band was the first of four bands formed during the early years of the Irish State and has performed at all major State ceremonial occasions since its establishment including all Presidential Inaugurations from that of the first president of Ireland, Douglas Hyde to the present day.

In addition to fulfilling all ceremonial music requirements for the Irish State and military ceremonial within the Defence Forces’ 2 Brigade, the band fulfils a busy schedule of public engagements including annual concert engagements in venues such as the National Concert Hall Dublin, RDS Dublin, recitals in St. Stephen’s Green, Dublin, and a highly successful schools concerts programme. In recent years the band has performed at festivals and military tattoos in Belgium, Italy, Holland, Germany and France.

Highly Strung – Harpist, flautist, violinist & vocalist have been performing together for over 10 years. Their musical style is an acoustic blend of classical, contemporary, traditional and anything in between. Their combination of instrumental & vocal arrangements create a special musical experience. They have had the pleasure of performing on many occasions at Castletown House, Co. Kildare as well as Fota House, Co. Cork & have also had the honour of performing for President Higgins and President McAleese.

Ballymore Eustace Concert Band is a community based, intergenerational ensemble founded in 1875. This award winning band competes and entertains at the highest levels in Ireland, performing at a variety of events from village fairs to Electric Picnic, an international music & arts festival. Jon Clifford has directed the band since 2011. Currently, the band’s eclectic repertoire features music from several genres including classical music, swing, jazz, music from movies and musicals and rock/pop arrangements.

Don’t miss this fantastic line up of musical talent every Saturday in September at The Irish National Stud & Gardens. Book your entrance tickets on our website today.