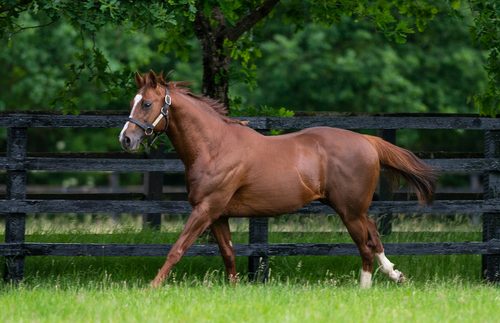 Decorated Knight’s purple patch continued on Sunday as Knockhill, from his second crop, made an impressive winning debut at Sandown Park.

The colt, trained by Kevin Philipart de Foy, hails from the same second crop as dual scorer Ferrari Queen, a recent second in the Listed Washington Singer Stakes at Newbury, and Palamon, who was second on debut for Richard Hannon at Newmarket last week. He is also the third winner in three days for his sire following Shahnaz and My Brother Jack, who won within hours of each other on Friday.

In a race full of highly regarded sorts, Knockhill travelled well in midfield for John Egan and made relentless progress to sweep down the outside and win in cosy fashion.

Egan was highly complimentary about the horse afterwards, saying: “We bought Knockhill in Newmarket and we syndicated him then and Harry Redknapp bought part of him. He’s a very, very nice horse. I’ve been so excited about him all along, and then he did a little piece of work alongside Derby runner-up Hoo Ya Mal, who came to me for a month. I was doing a little bit with him one morning and I told my partner to stay ten lengths off while I let Hoo Ya Mal go, and she came to my quarters and she was only doing half speed. For that to just happen with a two-year-old who had done nothing, wow, this is very good.

“I’ll have a chat with Kevin when I get home and see what he thinks, but he’s exciting. He’s as good a two-year-old as I’ve ever sat on, and I’ve ridden a lot of good ones.”

The colt was bred by Albert Conneally out of Grand Ole Opry, a half-sister to Group 1 winner Folk Opera. He was a 44,000gns buy out of the Tattersalls Guineas Breeze-Up Sale by Alliance Bloodstock.