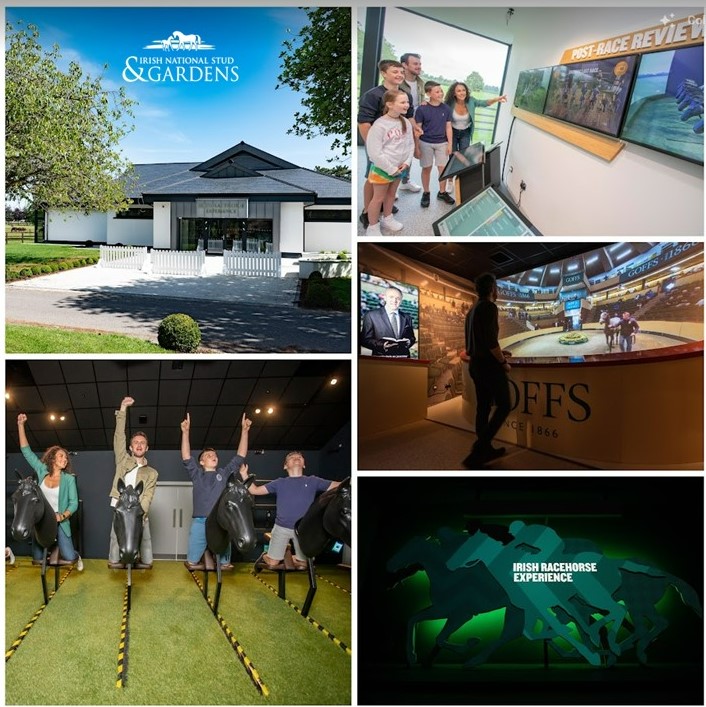 The Irish Racehorse Experience has won a top international award in the Themed Entertainment Sector which is the equivalent of an ‘Oscar’ for the World’s themed entertainment industry. The announcement was made at the International Association Amusement Parks & Attractions (IAAPA) Conference in Orlando on 15 November 2022. The Themed Entertainment Association (TEA) recognises excellence in the visitor attractions and entertainment industry and has awarded the Irish Racehorse Experience a “THEA” award for outstanding achievement. The Kildare attraction was only one of 3 European entries this year in a competition that has produced previous ‘Thea’ winners including Universal Studios and Disney attractions in Florida, Pirates of the Caribbean Disneyland Shanghai, Centre Parcs Domaine du Bois in France, Warner Brothers Harry Potter Studio Tour in UK as well as Jameson Distillery in Dublin and the Titanic venue in Belfast.

Peter Whittaker – Director, DMW Creative said “As designers of the Irish Racehorse Experience, we are delighted that the attraction has received an acclaimed Thea award. The Irish National Stud and Fáilte Ireland supported the vision for a ground breaking visitor experience every step of the way. This award is a testament to their courage and belief in unified physical and digital visitor experiences, and further proof of the ability for Irish design to compete at the highest international level.”

The accolade will be formally presented at an in person event in Disneyland Resort in Anaheim in April 2023 and the Kildare attraction won the “Excellence on a Limited Budget” category assuring annual recognition for experiences created for less than $5 million. Niall Gibbons,  Chief Executive of Tourism Ireland, said: “Congratulations to the Irish National Stud on winning a prestigious THEA award. It is a well-deserved accolade and testament to the hard work of the staff. Horse racing and the thoroughbred racehorse are a key part of the tourism offering for many of our overseas visitors and the Irish Racehorse Experience brings this to life in a new and imaginative way. This award will give Tourism Ireland another wonderful opportunity to continue to highlight the Irish National Stud and Ireland’s Ancient East as a world-class destination. We look forward to continuing to work closely with the team at the Irish National Stud, as we welcome back our overseas visitors”.

Located in Kildare’s leading visitor attraction the Irish National Stud which is set to have its best year ever with over 145,000 visitors and over 1 million since 2014 showcasing the beating heart of the thoroughbred industry in Ireland. The Irish Racehorse Experience opened its doors in June 2019 at a cost of €3.2m. It offers an immersive and interactive journey through the history of horse racing and tells the tale of the thoroughbred racehorse in a completely new and accessible way. It combines cutting-edge gaming technology with live video, audio and graphics to offer visitors the chance to buy and train their own thoroughbred racehorse, culminating in a thrilling real-time race, guaranteed to set pulses racing. Cathal Beale – CEO Irish National Stud said “The Irish Racehorse Experience provides a stage to showcase the Irish passion for our racehorses and bring that story to life in a way that everyone can interact with and enjoy. We are thrilled to have secured a THEA award and for the recognition it gives to The Irish Racehorse Experience as a significant addition to our world class tourism offering”.

Paul Kelly – CEO, Failte Ireland said ”Fáilte Ireland has invested almost €2 million in the Irish Racehorse Experience under our Grants Scheme for Large Tourism Projects 2016 – 2020. Since opening last year, it has become a real gem in Ireland’s Ancient East, and a big draw for tourists and horse-racing enthusiasts from around the world. The receipt of this Award is testament to the global appeal of this unique, immersive visitor attraction and reinforces Ireland’s reputation as a high-quality visitor destination”.

The TEA’s Thea Awards celebrate achievement and excellence within the themed entertainment industry and are internationally recognised as one of the most prestigious awards of the global attractions industry. Recipients are selected each year from hundreds of nominations submitted to the TEA Thea Awards Committee.