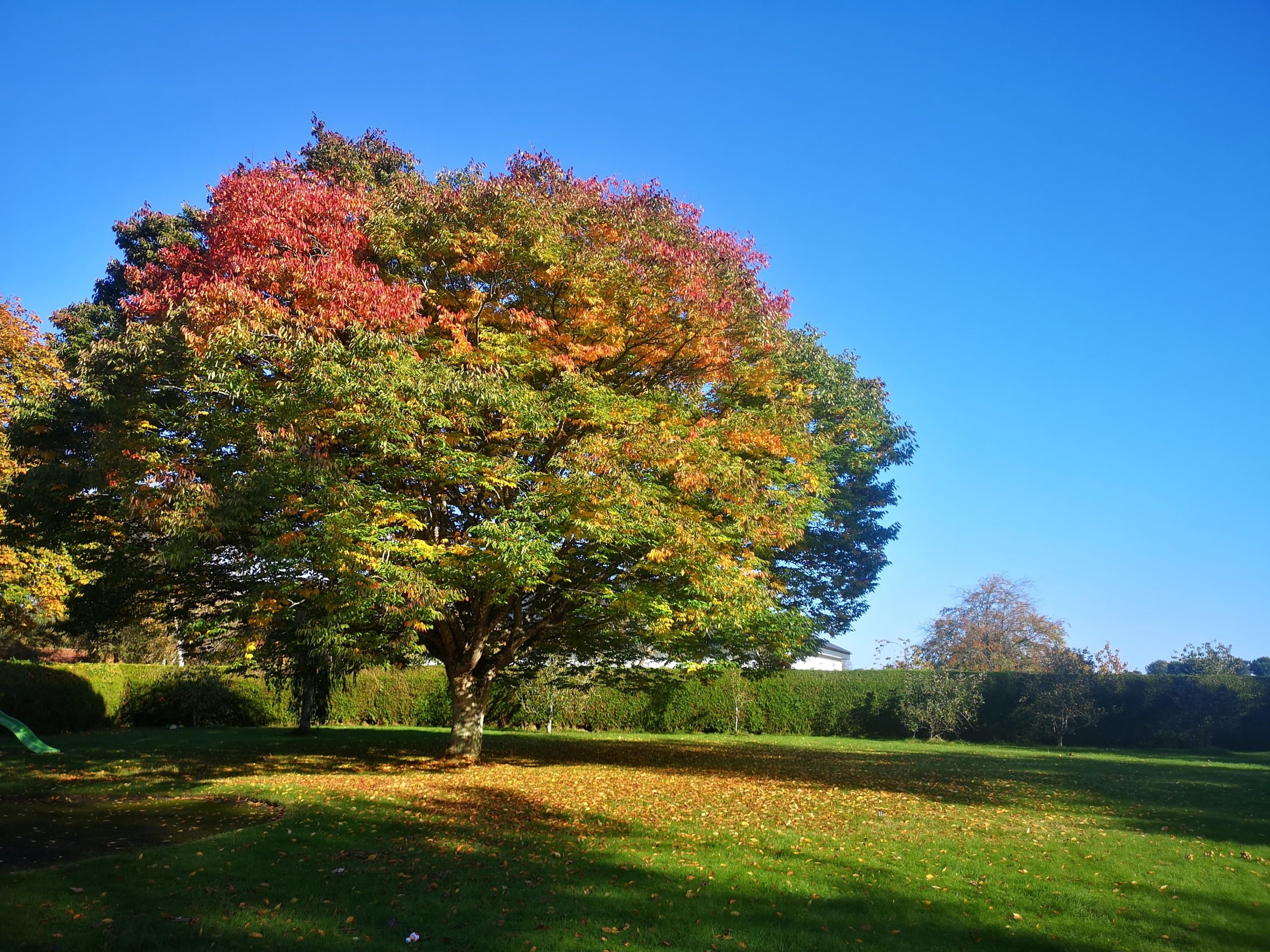 Over the coming weeks deciduous trees across the grounds here at the Irish National Stud will offer a final touch of drama to the gardens, as their leaves turn magnificent shades of golden yellow, orange, and red, before falling. I have compiled the list of top trees for autumn colours across the farm and gardens.

Native to Japan and China. Katzura tree is in numerous locations throughout the gardens most notably to the centre of the Zen Garden. Its branches arche in sprays of small, neatly toothed, oval leaves that turn pale to darker shades of yellow, while at the same time imparting a delicate but sweet aroma that you can detect at a distance.

Zelkova serrata is a native of Taiwan, eastern China, and Japan, where it is an important forest tree reaching 30 m in height, and 18 m in width. Located to the rear of Tully house this tree large specimen can be viewed from many locations across the gardens.  A medium sized tree of graceful, wide spreading habit, ultimately forming a rounded crown with smooth grey bark which gradually flakes to reveal orange beneath. One of the best trees for autumn colour, with slender leaves turning bronze, red or orange/yellow. This tree is perfect as a solitary specimen in large gardens and parks.

The Ginkgo biloba is one of the oldest living tree species in the world. It’s the sole survivor of an ancient group of trees that date back to before dinosaurs roamed the Earth – creatures that lived between 245 and 66 million years ago. It’s so ancient, the species is known as a ‘living fossi. We have a fantastic looking Specimen situated along the easy path in the Japanese Gardens.

A small tree which is quite insignificant for most of the year up until it bursts into a fiery golden orange colour with red hues. We carried out a crown lift (pruning the lower branches) on our trees which are in the lakebed sitting high and proud among the perennials underneath.

Located beside the waterfall in St Fiachra’s Garden. The autumn colour this tree displays is very difficult to beat. It is complimented with bright red berries which act as food source for the birds of the garden in the winter months.

Native to Japan and Korea, Cornus kousa is a large shrub or tree with oval leaves turning reddish-purple in autumn.  It has two good seasons of interest. In early summer it bears white bracts with tiny flowers in the centre, set against the green leaves, and in autumn the leaves flare bronze and crimson. Location Restaurant Bed overlooking The Zen Garden.

Flowering cherry trees are great value because they have two seasons of interest. They have masses of cherry blossom in spring and there is a terrific display of colour from the foliage in autumn.  One of the best is Sargent’s cherry, located in Minoru Island. It has bright red-brown leaves in spring, which for this tree is a lovely show of purple flushing of the leaves followed by bright orange and red. It can begin the process of transforming colour quite early.

Liquidambar is regarded as one of the finest trees for autumn colour. Relatively inconspicuous for most of the year, it’s maple-like leaves turn spectacular shades of orange and red in autumn. Located at the exit of our shop it was to recently planted as a replacement to a Horse chestnut which fell in a recent storm.

The great charm of this tree is in the beautiful tints of gold and crimson its foliage assumes in autumn. A Parrotia Persica was recently planted in Minoru Island, and it is sure to be an autumnal focal point for the future years to come.

‘Save the best till last’

With autumn colours varying from dazzling red to vibrant purples and orange, the diverse cultivars of Acer Palmatum create a spectacular picture. Easy to grow in containers as well as in the soil, Acer Palmatum’s delicate leaves change into fiery hues. Numerous varieties are planted throughout the Japanese Gardens, and we could create a list with Japenese Maples on their own. Acer Palmatum ‘Osakazuki’, Acer palmatum dissectum ‘Viridis’ and Acer japonicum Aconitifolium are just a few of the many spectacular maples displaying autumn colour here at the Japanese gardens.

Come and visit the grounds and view these spectacular displays for yourself.