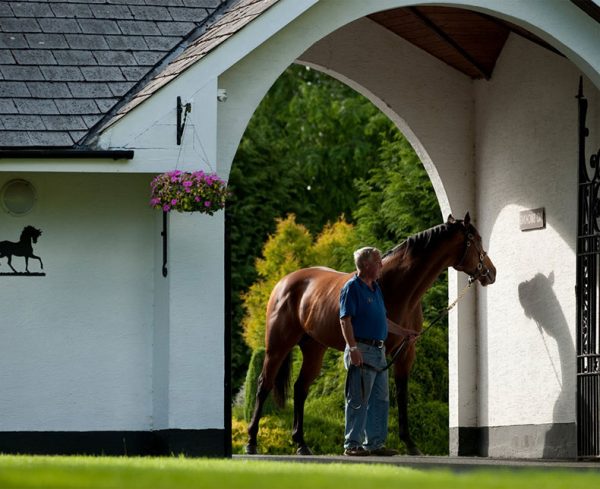 The farm at Tully was purchased from the Fay family in 1900 by a wealthy Scotsman from a famous brewing family, Colonel William Hall Walker.

Walker became the most successful breeder of the age, enjoying his finest hour when King Edward VII led Minoru, born and raised at Tully, into Epsom’s winners’ enclosure following a famous victory in the 1909 Derby. Hall Walker enjoyed an eccentric way of breeding and believed the stars would tell him the future of his racehorses.

The Irish National Stud’s Japanese Gardens, renowned throughout the world and the finest of their kind in Europe, were devised by Colonel William Hall Walker and laid out by Japanese master horticulturist Tassa Eida and his son Minoru.  Their aim was, through trees, plants, flowers, lawns, rocks and water, to symbolise the ‘Life of Man’. That plan was executed to perfection and Eida’s legacy is now admired by the 140,000 visitors who soak up the peace of the gardens every year.  Very much representative of Japanese gardens from the early 20th century, Eida’s work traces the journey of a soul from oblivion to eternity and portrays the human experience of its embodiment as it journeys by paths of its own choice through life. Birth, childhood, marriage, parenthood, old age, death and the afterlife are all brought to mind as the gardens, a seamless mixture of Eastern and Western cultures, are explored.

In 1915 the farm and all its stock was gifted to the Crown and became The National Stud under the leadership of Sir Henry Greer. The success continued with the farm producing the winners of all five Classics. In 1942 Sun Chariot, born and bred at Tully, earned herself an indelible place in racing history when landing the fillies’ Triple Crown – the 1,000 Guineas, Oaks and St. Leger – for King George VI.

Since then, the Irish National Stud has continually aimed to provide visitors with the knowledge and unique story of the Irish Thoroughbred. In 2020 the award-winning Irish Racehorse Experience was opened. A world-leading, interactive attraction, the Irish Racehorse Experience offers visitors the chance to own, train and ride their own Thoroughbred racehorse, culminating in a thrilling real-time race, guaranteed to set pulses racing. Visitors take a journey through the rich history and heritage of the Irish Thoroughbred sector, which sees Ireland as a world leader in breeding, training, and racing the best racehorses in the world; employing nearly 30,000 people in Ireland; and with a worth of almost €2bn to the Irish economy. From the moment the visitor starts on their journey, their decisions (and riding skills!) decide the result in the big race. Will you ride your colours to victory? After the race, visitors can watch and analyze their performance, while overlooking a paddock where retired racehorses, the Living Legends, such as Beef or Salmon, Hurricane Fly, Faugheen and Kicking King graze.

In 2022 the Irish National Stud will unveil the newly refurbished visitor centre including a unique gift shop offering visitors that special memento of their visit.

The stud has continued their successful breeding history and been the birthplace of Champions, rearing global winners such as Mishriff, Hurricane Fly, Sea the Stars and State of Rest. Also home to a select roster of stallions, each of which has won some of the most prestigious races in the world. The most influential stallion to have ever stood at the Stud is Invincible Spirit. Invincible Spirit commands an impressive stud fee of €60,000. The roster of stallions ensures that every type of breeder can find an ideal match for their mare.

Whether you love gardens, are a horse enthusiast, or a complete novice you are guaranteed a fun family day out at the Irish National Stud & Gardens in County Kildare.